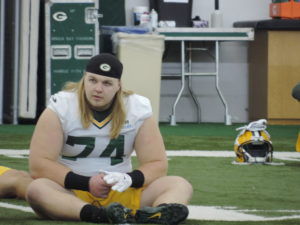 Matt Rotheram goes through stretches during rookie orientation on Friday

Matt Rotheram is a 2015 undrafted free agent from Pittsburgh that spent the last season on the practice squad.  That status allowed him to take part in the rookie orientation activities this weekend and he’s spending time working at center.

The Packers pegged Rotheram as a guard when they signed him, but now they’re giving him a shot at center, which would increase his value to the team.

Rotheram had an offer from the Philadelphia Eagles last season to join their 53-man roster in early December, but the Packers bumped up his salary to the rookie minimum of $25,588 per week and he decided to stick around.

The Packers already have two centers in front of Rotheram, Corey Linsley and JC Tretter, but Tretter is an unrestricted free agent after this year and Rotheram could turn out to be some insurance for the team.

Players arrived in Green Bay on Thursday for the Packers rookie orientation.   After a long day of getting to know their way around Lambeau Field along with several meetings, they hit the practice field for the first time on Friday.

The reason for rookie orientation is for the players to get their feet on the ground and get them ready for the rest of the offseason program with the veteran players.

The Packers also had 27 players in for a weekend tryout, including Wisconsin Lutheran wide receiver Mitch Skarban.

AUDIO: Mike McCarthy asked what he’s looking for from tryout players and undrafted FA’s in a short period of time :18