You are here: Home / News / Ryan set to meet with Trump 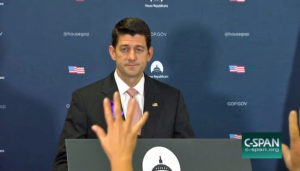 House Speaker Paul Ryan is set to meet with Donald Trump on Thursday. While not yet ready to support the presumptive GOP presidential nominee, Ryan said party unity is essential.

“To pretend we’re unified as a party after coming through a very bruising primary . . . to pretend we’re unified without actually unifying, then we go into the fall at half-strength,” Ryan said. “We cannot afford to lose this election to Hillary Clinton, to pack the Supreme Court, to keep the liberal Obama agenda going.”

The Wisconsin Republican, speaking to reporters in Washington, D.C. on Wednesday morning, insisted he’s looking forward to meeting with Trump. “I don’t really know him. I met him once in person in 2012. We had a very good conversation in March, on the phone. We just need to get to know each other, and we as a leadership team are enjoying the fact that we have a chance to meet with him.”