You are here: Home / News / Ryan ‘very encouraged’ by meeting with Trump 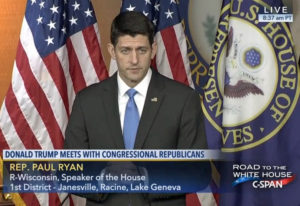 House Speaker Paul Ryan had his big meeting with Donald Trump on Thursday morning. So how did it go? Ryan was upbeat.

“This is our first meeting, I was very encouraged with this meeting, but this is a process. It takes a little time. You don’t put it together in 45 minutes,” Ryan said.

The Wisconsin Republican acknowledged that he and the likely GOP presidential nominee have policy differences. “I do believe that we are now planting the seeds to get ourselves unified, to bridge the gaps and differences. From here we’re going to go deeper into the policy areas.”

Ryan spoke with reporters in Washington following the meeting with Trump. “It’s important that the kind of conversation we had is between the two of us, and no offense, but I don’t want to litigate our conversation through the media.”

The United States cannot afford another four years of the Obama White House, which is what Hillary Clinton represents. That is why it’s critical that Republicans unite around our shared principles, advance a conservative agenda, and do all we can to win this fall. With that focus, we had a great conversation this morning. While we were honest about our few differences, we recognize that there are also many important areas of common ground. We will be having additional discussions, but remain confident there’s a great opportunity to unify our party and win this fall, and we are totally committed to working together to achieve that goal. We are extremely proud of the fact that many millions of new voters have entered the primary system, far more than ever before in the Republican Party’s history. This was our first meeting, but it was a very positive step toward unification.

Asked whether he’s actually endorsing Trump, Ryan didn’t give a direct yes or no answer. “The process of unifying the Republican party, which just finished perhaps one of the most divisive primaries in memory about a week ago, takes some time,” Ryan said.