You are here: Home / Brewers / Smith headed out on rehab assignment, Braun returns to action 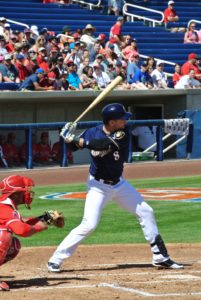 Milwaukee Brewers pitcher Will Smith will begin a minor league rehab assignment on Tuesday night with Class “A” Brevard County.

The left-handed reliever has been recovering from a torn L-C-L in his right knee at during Spring Training, in a freak accident while removing one of his shoes.

Manager Craig Counsell says Smith could make his season debut for the Brewers in early June if his rehab outings go well, and he has good results in two consecutive games.

Brewers outfielder Ryan Braun returned to the Milwaukee lineup Sunday, after missing six of the last seven games with a stiff lower back and a wrist issue.

Braun singled in four trips in the Brewers 3-1 loss to the New York Mets.