You are here: Home / News / Steineke: GOP voters have to make tough choice 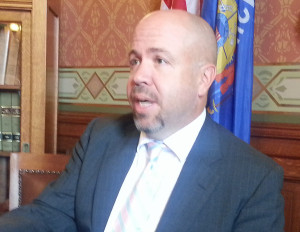 Assembly Majority Leader Jim Steineke (R-Kaukauna) has been a vocal opponent of Trump through much of the presidential race, and previously endorsed Florida Senator Marco Rubio and Texas Senator Ted Cruz for the GOP nomination. Steineke said Trump has not “earned his vote” yet, although he added that he has no plans to vote for Democratic front-runner Hillary Clinton either. “It’s going to be a difficult election cycle for me, personally,” Steineke said.

Steineke noted that it’s still possible a viable third party candidate could emerge in the coming months. “I think the one thing that we’ve learned in this election cycle is anything is possible,” he said. “There are Libertarian candidates out there who will probably get more attention than they have in the past.”