You are here: Home / Environment / Conservation / Taking a ‘snapshot’ of Wisconsin wildlife 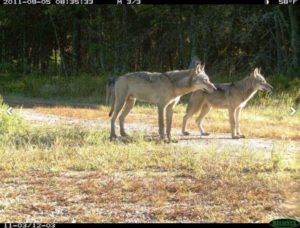 Wisconsin is home to numerous species of wild animals, although getting a handle on just how many can often prove quite difficult. A joint effort between University of Wisconsin-Madison researchers and the state Department of Natural Resources could take some of the guesswork out of that process, with members of the public also lending a hand.

The partnership announced Tuesday is part of a program called “Snapshot Wisconsin,” which will create a network of up to 5,000 trail cameras around the state. Citizen-scientists will volunteer to have one of the automated cameras on their property and then upload the images to an online database every few months.

The cameras will be placed in natural areas around the state, with one each in roughly nine square mile sections. About 500 are in place so far, primarily in Iowa and Sawyer Counties, with plans to send out more as additional counties become involved in the project. “The scale of what we’re aiming for…is unprecedented,” says UW-Madison Forest and Wildlife Ecology Professor Phil Townsend.

Once pictures are uploaded, the public will have a hand in helping to identify the animals that show up in the images. Through the Snapshot website, people around the world will be able to look at images and catalog the animals that appear in them. “There’s no way that we or the DNR could go through every photo that’s collected…so we harness the power of the crowd,” Townsend says.

Information from wildlife observations will be uploaded and analyzed by researchers, giving them an idea of population numbers, along with where species are living and how that changes between seasons. Townsend says that information will be extremely important in understanding wildlife habits, and help guide wildlife management plans. “We’ll now have comprehensive maps of all the species that get detected.”

The project officially launched on Tuesday, although it’s expected to take several years for all of the cameras to be deployed. Those interested in hosting a trail camera on their property can apply online.