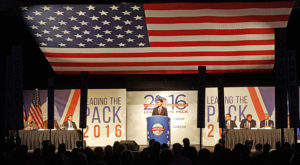 As Republicans kicked-off the campaign season during their state convention in Green Bay this weekend, Governor Scott Walker told delegates the party is “alive and well in Wisconsin.”

Walker also insisted that the party is unified heading into the November elections…behind U.S. Senator Ron Johnson (R-WI) as he faces a re-election bid against Democrat Russ Feingold. The governor noted that the race could decide the future majority of the Senate after November, and urged delegates “to remain focused like a laser beam” on helping Johnson defend his seat. “It’s not just about electing a Republican…it’s more fundamental than that,” he said, noting that Johnson “embodies Wisconsin values.”

Walker made no mention of the presidential race while speaking, joining several others addressing the convention who did not name Republican presidential nominee Donald Trump while up on stage. Those who did refer to the race did so only by mentioning “our nominee” or arguing that potential Democratic nominee Hillary Clinton can’t be allowed to win in November.

The governor has previously said he would support the eventual GOP nominee.

Walker also touted the accomplishments of his last five years in office during his speech, with a particular focus on education and tax reforms, along with efforts to make sure able-bodied adults are making their way into the workforce through programs such as job training and drug testing for benefits recipients. “We believe in the dignity that comes from work because we understand that true freedom and prosperity do not come from the mighty hand of the government…they come from empowering people to live their own lives and control their own destinies through the dignity that is inherent in work.”