You are here: Home / Environment / Conservation / Wildfire risk still high in many parts of Wisconsin 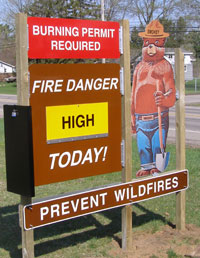 The risk for wildfire remains at the High level for most of Wisconsin, according to the Department of Natural Resources.

Douglas, Burnett and Washburn counties were under Extreme risk for fires on Saturday.  Overnight rainfall did not help reduce the fire threat after 17 fires broke out across the state on Friday.

The DNR prohibits burning with DNR-issued permits during increased levels of risk.  Almost half of Wisconsin’s counties, including most of central Wisconsin was placed at Very High risk.  You can track the risk level for your county and see an active map of reported fires through the DNR website.