You are here: Home / News / Wisconsin police officers take part in ‘Unity Ride’ to US Capitol 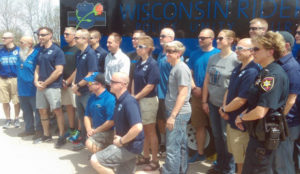 More than 30 law enforcement officers from Wisconsin took off on bicycles from Philadelphia today, as they ride to Washington D.C. to honor police officers who have died in the line of duty.

The Unity Ride is a fundraiser for the National Law Enforcement Memorial. Those riding from Wisconsin are honoring two officers from the state killed in the past year – State Trooper Trevor Casper and McFarland Police Officer Ryan Copeland. Casper was killed in a shootout with a bank robbery suspect in March of last year, while Copeland was killed in a traffic accident last November.

Trooper Clarissa Justmann, who was there when Casper died, said it’s been a heart-breaking year for her, and she thinks about him every day.

Wisconsin will honor fallen police officers at a ceremony on May 20th, and the state’s Law Enforcement Memorial located on the capitol grounds in Madison.