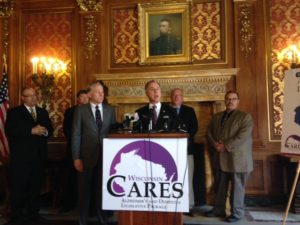 Assembly Speaker Robin Vos launched the task force last August. “The most important part of it – that’s why we’re here today – is to make sure the public understands all of the situations that families deal with, and ways that they struggle, but also the resources that are available to get the care they really deserve,” Vos said.

The panel was chaired by Representative Mike Rohrkaste, a Neenah Republican. “My mom suffered from dementia, and my kids, her grandkids have a very, I guess less than favorable memory of her,” he said. Rohrkaste is recommending Alzheimmer’s and Dementia education for K-12 students.

Rob Gundermann with Alzheimer’s and Dementia Alliance of Wisconsin noted lawmakers have already done good work on the issue, including a million dollar increase in funding for in-home caregiver support.

“It doesn’t take much when you compare the cost of a few hours of in home services once a week, to the cost of nearly $100,000 a year for nursing home care,” Gundermann said.