You are here: Home / Brewers / Cardinals dominance of the Brewers continues 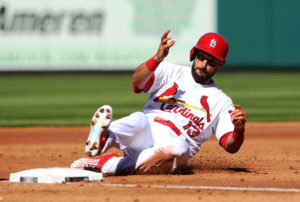 Cardinal Matt Carpenter with another three-hit day against the Brewers. Photo by Bill Greenblatt/UPI

Whatever it is that makes the St. Louis Cardinals so comfortable inside Miller Park, it continued on Tuesday night.

The Cardinals broke open a 3-2 lead in the 7th and pulled out a 10-3 victory.  Since Miller Park opened its doors, the Cardinals have posted a 77-47 record against the Brewers, including 30 wins in the last 40 games.

The Cardinals worked Wily Peralta’s pitch count to 97 through five innings, sending him to the showers early.  Peralta has now failed to pitch at least six innings in nine of his 11 starts.  He fell to 3-6 with a 6.51 ERA.

Carpenter is also getting well against the Brewers.  He entered the series hitting .241.  After two games, he’s upped his total to .272.

The Brewers were able to keep the game close until the 7th when the Cardinals scored twice to make it 5-2, then blew the game open with a five-run eighth inning.

The Cardinals finished with 14 hits.

The Brewers will try to salvage the final game of the series with an afternoon game today.

AUDIO: Jonathan Lucroy on why the Cardinals are so successful at Miller Park :18