You are here: Home / Packers / Clark is confident deal will get done soon (AUDIO) 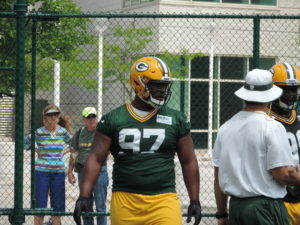 Clark should get his contract done before players report for training camp on July 25th.  The Packers haven’t had a rookie holdout since the rookie salary pool was instituted back in 2011.

While Clark believes the two sides are close, it would appear that Clark’s agent, Jerome Stanley is looking to structure the deal differently than what the Packers have in mind.

AUDIO: Kenny Clark is asked about his contract status :10

AUDIO: Kenny Clark is asked if he anticipates a deal in the next week :07