You are here: Home / Packers / Cobb says no more microphones 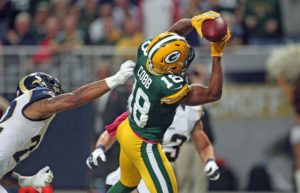 Cobb landed square on his back, punctured a lung and wound up in a Phoenix hospital.

It was originally thought and reported that Cobb broke a rib, which caused the punctured lung.  Since then, both Cobb and the Green Bay medical staff sais there was no broken rib and they believe the punctured lung was the result of the battery pack attached to the microphone.

Cobb was asked about it after a OTA workout on Thursday.

Cobb is back to full health now and is a full participant in the Packers offseason program.