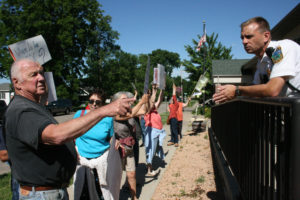 Demonstrators stand outside the Pepin Village Hall on Monday, while Governor Scott Walker attends a listening session inside (Photo: WRDN)

Governor Scott Walker has made a point of touting the long line of listening sessions he’s held across the state in the past several months. However, the often limited public access is drawing some criticism from Democrats, who question how unbiased the opinions are that the Republican governor is hearing at the invitation-only events

A group of about three dozen people stood outside the Pepin Village Hall on Monday, as Walker attended one such listening session behind closed doors.

Pepin County Democratic Party Chairman Bruce Johnson said he felt compelled to see about getting into the event, which was not publicized. “More people should have a say and should be able to talk to their governor, whose coming here on the taxpayer dime,” he argued.

In an email, Walker spokesman Tom Evenson said the listening sessions are closed because “we want this to be a personal conversation between constituents and the governor and to make attendees feel more comfortable in expressing their opinions.”
Evenson added that the governor has held about 40 sessions so far and has heard from over a thousand people from across the political spectrum. “We welcome diverse viewpoints,” he said.

Affiliate WRDN contributed to this report.