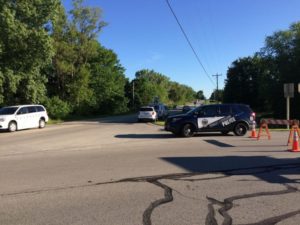 Two women were killed, one man is hurt and a suspect is in custody after a gruesome crime in Hobart.

Hobart-Lawrence Police say officers were called to a home Tuesday night just after 8 p.m., where they found the body of a woman outside. Inside, officers found a man with stab wounds to his chest and arms. Another woman was found dead in a bathroom.

The Hobart man was rushed to a local hospital where he underwent surgery and is expected to survive. The two women killed, who were 25 and 63-years-old, also live in Hobart.

During a search of the property with a K-9 unit, officers found the suspect hiding in a wooded area adjacent to the property. The 26-year-old Ashwaubenon man was taken into custody and taken to a hospital for treatment of injuries. He’s currently at the Brown County Jail and charges against him are pending.

Investigators say that a weapon has not been recovered yet, and the suspect is believed to be an ex-boyfriend of the 25-year-old woman.

The investigation is ongoing.