You are here: Home / News / Feingold decries outside spending in Senate race with Johnson 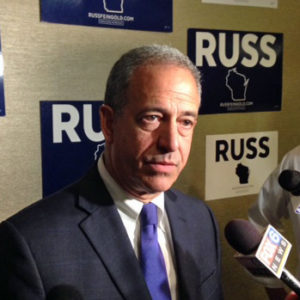 Russ Feingold received a boost from his fellow Wisconsin Democrats at the party’s state convention in Green Bay. Feingold, who lost his seat to Republican Ron Johnson in 2010, says outside groups are spending millions to influence his bid to return to the U.S. Senate.

“Those two million dollars worth of ads exploiting the death of a veteran to attack me, those aren’t paid for by Ron Johnson’s campaign. That’s largely paid for by the Koch brothers. It’s part of the out-of-state takeover,” he said.

Speaking with reporters after his remarks, Feingold said he has no control over outside groups spending on his behalf, and noted that Johnson declined to sign on to his proposed ‘Badger Pledge,’ which would have had both candidates agreeing to make a donation to a charity of the opponent’s choosing every time an outside group runs an ad that benefits them.

Feingold says he’s traveled to all 72 counties in Wisconsin, putting over 40,000 miles on his campaign’s van. As for Johnson, Feingold quoted the Republican senator in a video he did with Republican Governor Scott Walker, in which he expressed a hope that what Walker has done for the state can be done on a national scale.

Wrapping up his remarks to the delegates, Feingold admitted he regrets referring to every election as the most important in voters’ lifetimes. “Whether your 80, or 60 or 40 or 10, this will turn out to be the most important election of your lifetime.”