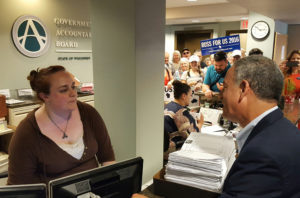 The state Government Accountability Board will meet Friday morning to consider about a dozen challenges against candidates trying to get on the ballot for upcoming legislative and Congressional races in Wisconsin.

The board will review 13 cases surrounding candidates for upcoming primaries in August and the general election in November. GAB director Kevin Kennedy says many of those focus on signatures submitted ahead of last week’s deadline, with challenges covering issues such as the legibility of a signature or whether a signer resides in the district of the candidate.

Getting enough of those thrown out by the board can get a candidate removed from the ballot, especially when some submit just barely enough signatures on the nominating papers they turned in ahead of last week’s deadline. “If you’re within 10 percent of that threshold, people will look very carefully,” he says.

Kennedy notes the burden of proof is on the challenger, since GAB staff only does a general review of the thousands of signatures that are submitted to the agency each election cycle.

Getting a candidate off of the ballot is difficult, but it does happen in a handful of cases each year. However, Kennedy says many of the challenges are more politically motivated by an opponent or their supporters.

Those facing challenges include Paul Nehlen, who is running against House Speaker Paul Ryan (R-WI) of Janesville in a Republican primary, along with incumbent state Representatives Christine Sinicki (D-Milwaukee) and Leon Young (D-Milwaukee).

Friday’s meeting is the last time the GAB is expected to meet in its current form. The agency will split into separate ethics and elections panels at the end of June.