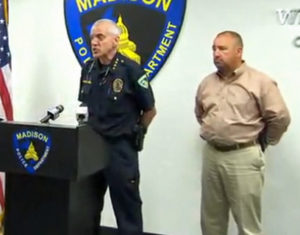 “Within the last month, MPD recieved information about a plot to kill a Madison police officer,” Koval said.

An inmate in the Dane County jail informed police that another inmate had contacted him, asking to have the officer killed. Koval says 20-year-old Alijouwon Tupac Watkins had personal information about the officer, including her name, date of birth, personal cell phone number, and the general work hours and the district to which the officer was assigned.

Koval says the officer had previously arrested Watkins, the encounter turning violent and the officer sustaining a concussion, and her partner less severe injuries.

MPD worked on the case with the Dane County Sheriff’s Office and ATF.