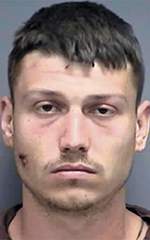 A 27-year-old Janesville man who plead guilty to smoking marijuana before causing the traffic crash that killed a Brodhead woman’s unborn child will spend nearly two decades in prison.

Russell is accused of causing a crash on Highway 11 in Orfordville in which a 29-year-old woman lost her unborn baby, and three other children were injured.

As part of a deal with the prosecution, Russell pleaded guilty to homicide of an unborn child by the intoxicated use of a motor vehicle, along with three counts of Operating While Intoxicated causing injury to a child, in exchange for several other charges being dropped.