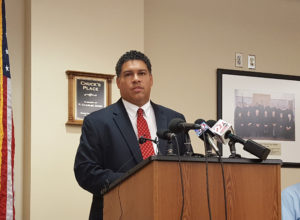 No charges will be filed against a Madison teen who was arrested earlier this week during a physical confrontation with police.

During a press conference Friday afternoon, Dane County District Attorney Ismael Ozanne said 18-year-old Genele Laird will be allowed to take part in a restorative justice program, instead of facing charges that could have included felonies. However, Ozanne noted that he does have a criminal complaint ready to go, if Laird fails to complete the program. “Restorative justice is something I support to hold offenders accountable,” he said.

Laird was arrested at a Madison mall Tuesday, after police say she displayed a knife, threatened other employees, and resisted arrest. The arrest was recorded by a cell phone, and the video quickly went viral earlier this week. It resulted in protests amid claims that police acted too aggressively during the arrest.

Ozanne said the restorative justice option is possible in this case because the victims in the case have agreed to the use of the program and because Laird, through her attorneys, has accepted “that it was her conduct towards her fellow community members, including the officers involved, that caused this incident.”

Police Chief Mike Koval backed the plan to use restorative justice, while cautioning that he does not consider it to be the “new normal” for how such clashes between police and the community will be handled. “We expect that the district attorney will still look at these, rigorously, on a case-by-case basis, on the merits,” he said.

Koval continued to defend the response of the officers who arrested Laird, although he has called for an internal review of the incident.