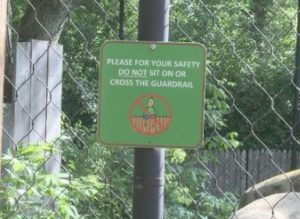 Officials at Madison’s Henry Vilas Zoo are doing a safety check and making some small changes, after the high profile shooting death of a gorilla at the Cincinnati zoo.

Zoo officials last weekend shot and killed a gorilla, after it grabbed a young boy who had entered the enclosure. The incident has prompted national criticism of the child’s parents and zoo officials, and has resulted in questions about what zoos are doing to protect visitors and the animals in exhibits.

Vilas Zoo deputy director Jeff Halter says new signs went up this week to remind patrons of the dangers of wild animals. Zoo staff also did a walk through of the property to identify any railings or exposures that could pose a safety risk. Halter says the do plan to replace a rail in front of the zoo’s lion exhibit with a mesh screen, so parents don’t have to hold children up to see the animals.

The Madison zoo does not have any gorillas and there have not been any recent incidents were an animal had to be put down at the zoo. The last was in the 1980s, when a man jumped into the polar bear exhibit and the bear was killed in response to safety concerns.