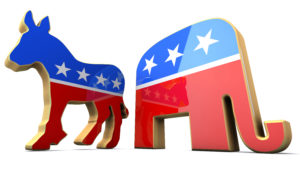 More than 1.1 million Republicans and a million Democrats voted in Wisconsin’s April 5th Presidential Primaries, and a new national survey indicates those partisans have a pretty negative view of people who are in the opposing party.

According to the study by the Pew Research Center, 70 percent of Democrats consider Republicans “closed minded,” while nearly half of Republicans consider Democrats to be “more immoral and dishonest” and “lazier.”

Carroll Doherty, political research director for the Pew Research Center, says they knew that people have grown to dislike the opposing party, but they wanted to see if it was “getting personal.” He says the results show that, “to a degree, it is.”

The findings also show that many voters who consider themselves independent are actually “closet partisans” who feel “very negatively” about one party. “They don’t want to affiliate because they don’t have a particularly strong view of that party, but they also dislike the other side even more,” Doherty says.

Doherty says fear of what the other party might do is a big motivator for political involvement now. “The bottom line is that negativity is kind of more powerful than positive feelings and…is driving a lot of political engagement these days.”