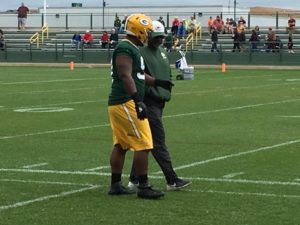 It was just 24 hours earlier that Clark was asked by reporters if he was concerned about getting a deal done anytime soon.  Clark said his agent was talking to the Packers and he assumed the two sides weren’t very far apart.

Clark was one of just five first round picks around the league that started the day on Friday without a deal.  Clark’s deal leaves just four.

The others are the third overall pick, end Joey Bosa to the Chargers, the 20th pick, linebacker Darron Lee by the New York Jets, the 21st pick, wide receiver Will Fuller to Houston and the 28th overall pick, offensive lineman Joshua Garnett to San Francisco.

It means the Packers will have all of their draft picks in the fold for the start of training camp on July 25th.