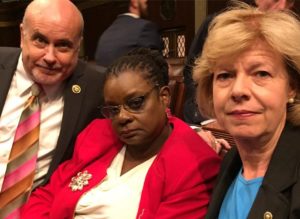 U.S. Representative Mark Pocan (D-WI) and Gwen Moore (D-WI), along with U.S. Sen. Tammy Baldwin (D-WI) on the floor of the U.S. House.

A Democratic Congressman from Wisconsin hopes the more than 24-hour sit-in on the floor of the U.S. House of Representative will put pressure on Republicans to act on gun control.

The sit-in ended Thursday afternoon without any votes, although U.S. Rep. Mark Pocan (D-WI) believes it will impact the ongoing debate. “The Republicans are going to go back to their districts…and talk to their constituents and find out what we’re finding out – people want us to address gun violence.”

The Madison Democrat thinks a decision by majority Republicans to turn off TV cameras in the House backfired on the GOP, since lawmakers were able to turn to streaming services through social media sites to get their message out. C-SPAN picked up those feeds and aired them, and Pocan believes “far more people watched it and plugged in than they would have if it had just been on normal C-SPAN.”

Among the bill Democrats were calling for a vote on was legislation that would prevent individuals on the terrorist no-fly list from buying firearms. While the bill has drawn criticism from Republicans, the FBI, and civil liberties groups, Pocan says it at least deserves to be debate so it can be improved. “Let us have that debate, don’t be just so strong-handed that you won’t allow anything that contradicts the (National Rifle Association’s) narrative to come to the floor.”