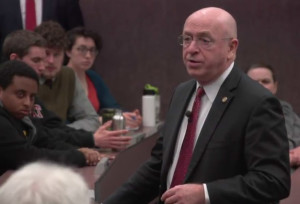 The University of Wisconsin System Board of Regents have unanimously approved a 2016-17 totaling $6.2 billion.

The vote on the budget followed a brief discussion, and comments by UW System President Ray Cross, who noted that state financing has diminished.

The budget calls for spending $160 million out of the System’s reserve funds, which became a highly contentious issue with Republican lawmakers in 2012.

It includes an increase in student fees, housing and meal plan costs on all campuses.