You are here: Home / News / Rhinelander Hodag gets its claws back 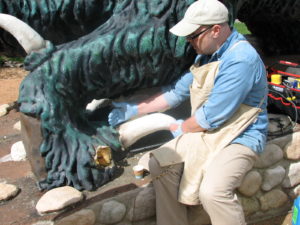 The most famous mythical beast in Wisconsin’s Northwoods has all of its claws back.

Vandals removed four of the claws from the large sculpture last winter as a prank. They were recovered within weeks and reattached this spring by Rhinelander sculptor Chuck Williams.

Williams added some reinforcement to the foam and fiberglass mascot’s claws to make sure any potential thieves in the future will have a harder time removing them.

Police arrested two men in December, who confessed to getting drunk and stealing the claws as souvenirs.