You are here: Home / News / Ryan has no plans to rescind endorsement of Trump 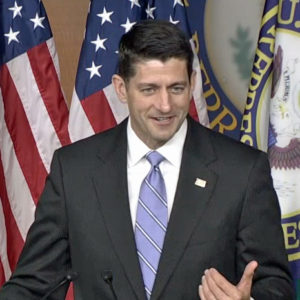 House Speaker Paul Ryan has no plans to rescind his endorsement of Donald Trump. During his weekly media briefing in Washington D.C., the Wisconsin Republican was asked how many more times he’ll have to react to comments from Trump.

Trump said Wednesday that congressional GOP leadership should “be quiet.” Ryan responded “you can’t make this up sometimes.”

Trump also said this week that he was suspending the Washington Post’s credentials to cover his campaign. “I think that’s a new one,” Ryan said, before pointedly offering the last question to a reporter from the Post.

Ryan’s endorsement of his party’s presumptive presidential nominee isn’t hurting him with Wisconsin Republicans. The most recent Marquertte Law School Poll released this week found that while only 38 percent of poll respondents support that decision, a majority — 69 percent — of Republicans do.