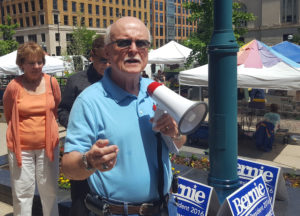 Buzz Davis is among many Sanders supporters calling for changes in the superdelegate system. (Photo: Andrew Beckett)

Wisconsin supporters of Democratic presidential candidate Bernie Sanders want the state party to get behind a push to abolish the superdelegate system.

While Wisconsin uses the primary results to award the bulk of its delegates, it has ten superdelegates who may back the candidate of their choosing. Buzz Davis, a delegate to the state party’s convention in Green Bay this weekend, is among many Sanders supporters who think that rigs the system. “It’s a corrupt system, and it’s designed just to ensure that Democracy will not be stolen by the people,” he said during a news conference in Madison Wednesday.

Sanders, a US Senator from Vermont, won Wisconsin’s presidential primary, but six of the state’s superdelegates have pledged their support to former Secretary of State Hillary Clinton.

A platform resolution being offered at the state Democratic Party convention this weekend calls for abolishing the superdelegate system during the 2020 cycle, and urges delegates to cast those votes proportionally at the national convention later this summer. “The best we can do is neutralize their power and make them vote, encourage them to vote, demand that they vote the same way as their city, their state voted,” Davis said.

In a statement, DPW spokesman Brandon Weathersby said the convention this weekend will offer a great opportunity for Democrats to talk about the future of the party. “We look forward to a healthy discussion on Saturday about proposed resolutions and changes to the party platform – including conversations about how pledged and un-pledged national delegates are selected. As Democrats in Wisconsin, we pride ourselves on being open and fair, and giving people across the state a process and venue to share their ideas and address their concerns.”