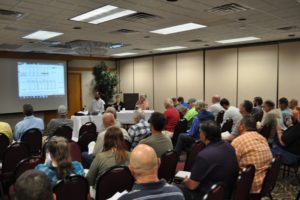 Wisconsin’s Department of Natural Resources has completed it’s most expansive study ever of the state’s wolf population, and the results show the largest amount of wolves in the state in recorded history.

The grey wolf was placed on the endangered species list in 2014 because of a federal district court ruling, and because of that, the DNR has had to change their tactics to prevent depredation. Brad Koele, Wildlife Damage Specialist for the DNR, said that the switch from lethal to nonlethal methods hasn’t been as effective as they’d like.

“What we found last year is that the number of farms experiencing conflicts and the number of individual livestock lost increased without that ability,” said Koele. “Without having a full integrated suite of depredation management options, mainly that lethal control option, there are some depredation situations we can’t resolve.”

Forty-eight conflicts with wolves have been reported in 2016 so far, with 23 related to encounters with livestock. This data shows that the wolf population is healthy and resilient, according to David MacFarland, Large Carnivore Specialist for the DNR. MacFarland is not sure whether this will lead to the wolf being removed from the endangered species list.

“We’ve been well above federal recovery goals for a number of years in this state. I guess I don’t know how that will factor into the decision making by the courts or the federal government,” said MacFarland. “There’s enough resources out there, enough land mass out there, that this population is continuing to grow, which again, is just an indication of the vibrance and the viability of Wisconsin’s wolf population.”

MacFarland says the large numbers have begun to expand into new areas that were thought to be not ideal for a wolf pack, including three new packs in Marathon County. “We’ve started to have wolf packs establishing and continuing growth into areas that are more of a mixed use of human land uses and more wild lands, where we would traditionally find wolves,” he said.

Despite this new territory for the wolves, MacFarland pointed out that Wisconsin has never had a reported human injury from a wolf. “Hopefully, it stays that way. Certainly, they’re an animal that’s capable of that, so people should treat them with respect and give them their distance. Hopefully, we can avoid any of those conflicts.”

The research covered nearly 18,000 miles thanks to the help of 139 volunteer trackers. The population is up by 16% over last year’s numbers, with 866 to 897 wolves currently living in Wisconsin.