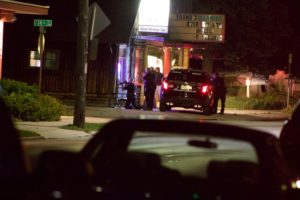 Police were dispatched to the Union Avenue Tap around 11:30 Sunday night for a report of shots being fired and an armed robbery. Police chief Christopher Domagalski says officers arrived to find a man carrying an AR-15 style rifle leaving the bar. They ordered him to drop the weapon and when he did not, they shot and killed him.

Further investigation showed that when the man entered the tavern, there were two patrons and two employees still inside. Domagalski says one was injured. “One of the employees, a 53-year-old male, also received a gunshot wound to the arm, and possibly a graze wound to the chest.” The man was taken to Froedert Hospital where he is undergoing surgery.

The entire investigation has now been turned over to the Winnebago County sheriff’s department, and Domagalski says Sheboygan Police will not be releasing any more information.