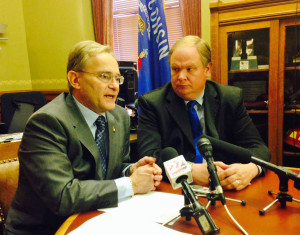 A top Wisconsin Democrat says opposition to a controversial trade deal unites the party. At the Democratic National Convention, Assembly Minority Leader Peter Barca of Kenosha says the Trans Pacific Partnership is something that unites Democrats in Philadelphia.

“TPP is something that both Bernie backers and Hillary backers generally oppose,” Barca told the hosts of Devil’s Advocate Radio.

Barca says Democrats believe in the “free and fair” trade — but that workers in the U.S. and Wisconsin have yet to see the “fair” side of the equation. “With our delegation of people here from Wisconsin, I would say that probably 95 percent of them share that sentiment, that we’re opposed to TPP.

On Wednesday at the DNC, Wisconsin Congressman Ron Kind was booed by opponents of the trade deal. Donald Trump and Hillary Clinton both oppose the TPP – although Clinton supported it while negotiations were underway. The U.S. Congress has yet to ratify the TPP, which was signed by 12 nations in February.