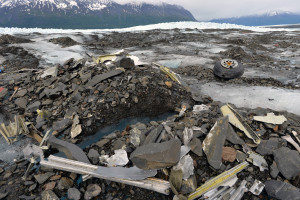 A military funeral was held Thursday in Beloit for a serviceman lost in the crash of a military transport plane in Alaska more than 60 years ago. Airman George Ingram was a crew member of a C-124 Globemaster which crashed near Anchorage in 1952.

Search crews were unable to find any survivors, and located only tail section of the plane. The U.S. Air Force declared the 11 crew members 41 other service members on board the place as deceased.

The aircraft wreckage was rediscovered in 2012 by an Alaska National Guard Black Hawk Helicopter on a training mission. It was some 16 kilometers from the crash site where it had been carried by the Colony Glacier. Since then military teams have gone to the site to recover any remains and wreckage they could before they are carried into nearby Lake George.

The POW-MIA Accounting Command has now identified the remains through DNA. Ingram was buried with full military honors in the Veterans Section of Eastlawn Cemetery.