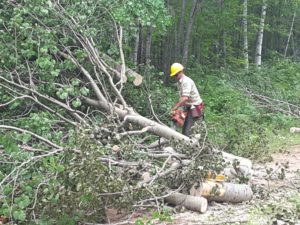 Progress is being made in the clean-up of the severe damage done to the Washburn Ranger District of the Chequamegon National Forest during a wind storm last Thursday.

The U.S. Forest Service has sent heavy equipment operators and saw teams into the region to clear roads, trails and campgrounds.

Despite clearing 12 miles of trails over the weekend, the closure of all forest system lands north of Highway 2 in the Washburn Ranger District remains in place.

Following the storm, the initial efforts were clearing access roads to the Birch Grove Campground and other recreation areas where some campers were trapped and injuries were reported.

Several of the same areas were damaged in the flash floods from July 11th.