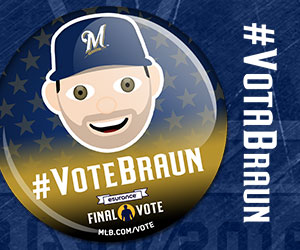 The Brewers Ryan Braun will need a massive comeback in fan voting in his attempt to reach this year’s All-Star game with the Final Vote.  MLB released the standings in the fan voting through Thursday that showed the six-time all-star outfielder was in last place among the five choices that fans had to vote on.

Voting is open to fans until 3pm on Friday.