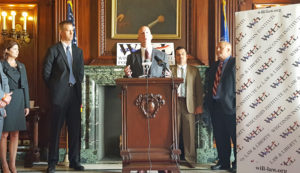 A Wisconsin conservative group is launching a national effort to advocate for state’s rights.

The Center for Competitive Federalism will focus in on what supporters believe is the overreach of the federal government. Director Mario Loyola says that includes examining the tough choices lawmakers face when they have to decide whether to represent the people who elected them or to “accept the imposition” of federal mandates in order to access grants and other funding from the federal government in areas that overlap between federal and state authority.

During a press conference at the Capitol Monday, supporters of the effort pointed to examples that include federal transportation funding and a recent letter that said schools should allow transgender students to use bathrooms and changing facilities of their choice.

The Center is expected to focus on filing lawsuits and releasing reports that target federal policies it believes infringe on the rights of states. It’s being back financially by the Wisconsin Institute for Law and Liberty, a group that has filed previously been involved in legal battles supporting Republican policies.

Several Republican lawmakers spoke out in support of its creation Monday, including Lieutenant Governor Rebecca Kleefisch and state Sen. Duey Stroebel (R-Saukville). Stroebel said he supports a return to more local control. “We all believe in local government, and certainly we’re seeing the results of federal government gone wild.”

Liberal group One Wisconsin Now criticized the announcement, which executive director Scot Ross called an effort by Governor Scott Walker’s campaign chair to do what the governor has been unable to accomplish with his policies. “There’s only so much reach the governor has,” Ross said. “He has a radical social agenda, a failed economic agenda, and he wants as he can to punish his opponents.”