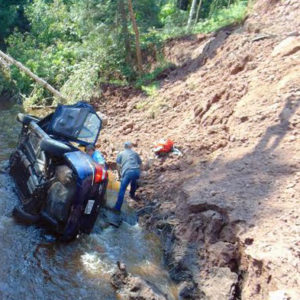 A woman who drove around road closure signs died after crashing her vehicle into a washout on Highway 63 in Bayfield County on Monday.

According to the Bayfield County Sheriff’s Office, after passing signs at Raymond Avenue in Grand View and another about a half mile closer to the washout, the woman’s vehicle drove into the washed out portion of the road and came to rest about 50 feet down.

The vehicle was spotted by a DOT official who was assessing damage to the road, just north of Grand View around 9:30 a-m.  The victim had to be extricated from her vehicle and brought up to road level with rope rescue equipment.

She was taken to St. Luke’s in Duluth by Life Link helicopter where she died of her injuries. The victim’s name has not yet been released as relatives are being notified. The death is the fourth in connection with flooding in northwestern Wisconsin.