You are here: Home / Fires/Accidents/Disasters / FEMA to inspect flood damage in northern Wisconsin 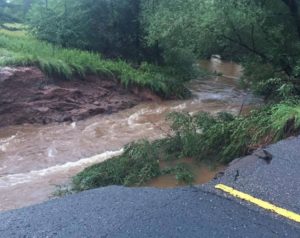 The Federal Emergency Management Agency will look at northern Wisconsin’s storm damage next week, to see if it’s enough to qualify for possible disaster aid.

Governor Scott Walker has asked FEMA to assess the damage to government and tribal facilities — including roads and bridges. Many roads remain closed one week after as much as eleven inches of rain fell in the region – which includes Ashland, Bayfield, Burnett, Douglas, Iron, Price, Sawyer, and Washburn counties. Walker already declared a state of emergency in the area last week.

Preliminary estimates put the damage to public facilities and infrastructure at almost $29 million. That figure could grow as crews continue to inspect areas impacted by flooding.

The FEMA assessment begins next Monday. Walker’s office says it will take several days to complete.