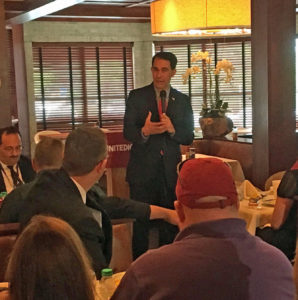 Governor Scott Walker is not ruling out another run for the White House at some point in the future. However, the Republican says he will not consider seeking the nomination again in 2020 if he’s still serving as the governor of Wisconsin at the time.

Walker says he’s more focused right now on deciding whether to seeking re-election in 2018, a possibility he has hinted at several times since this spring. Speaking to reporters from Iowa on Monday, Walker said “I made it clear in my state that, if I ran for re-election, I would not run for any other office during that term.”

Walker launched his presidential campaign nearly a year ago, then dropped out of the race in late September. He says one thing he learned from that experience is that it’s difficult to campaign while holding another office. “It makes it difficult to be the candidate you need to be to win if you’re still in office as a governor, so if I win in 2018 I would fufill my term as governor.”