You are here: Home / News / Heavy rains wash out roads in NW Wisconsin 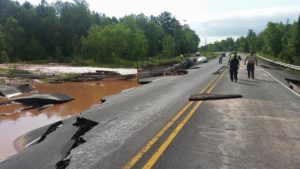 Heavy rains washed out roads and knocked out power Monday night in parts of northwest Wisconsin.

Locations in Douglas, Burnett, and Washburn counties had four to five inches of rain Monday night. Portions of Highways 2 and 13 were closed, and the Ashland County Sheriff’s Department is advising no travel, with many local roads closed due to flooding.

While a flash flood warning is canceled, flooding is still possible over the next two days. Forecasters say the most significant flooding could take place from Minong to Danbury — and in the Ashland, Hurley, and Hayward areas.

The National Weather Service says more strong storms are expected this afternoon and evening in most of Wisconsin.

About 21,000 electric customers were without power Tuesday morning across the northern third of Wisconsin plus Grant County in the far southwest.
–