You are here: Home / Crime / Courts / Man killed by Sheboygan police officers was prepared for shootout 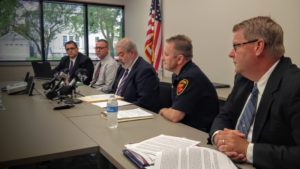 Investigators now believe that the suspect in deadly officer-involved shooting earlier this month intended to die in a gunfight with officers.

At a press conference on Friday, Sheboygan County District Attorney Joe DeCecco said an investigation in the incident shows officers from the Sheboygan police department did follow the department’s policy on deadly force, and that Kevin Higgins came prepared for a conflict with officers.

The report says that Higgins came to the Union Avenue Tap around 11:30 pm on July 17 wearing camouflage, carrying a backpack and wielding a rifle that had a scope and a suppressor attached. He entered the bar and approached the bartender, telling him that this was a robbery. The bartender thought it was a joke at first, but then opened up the till to take out money. Higgins allegedly looked at the bills and took a few of the larger ones.

Both the bartender and a patron were able to make 911 calls, and police were alerted to a possible armed robbery at the bar. Officers Brandon Kehoe and Anthony Hamilton responded without lights and sirens, and were able to see the robbery taking place inside of the bar. They were unable to see Higgins, and took up positions at an entrance to the building.

Higgins then backed out of the door and turned to find Officers Kehoe and Hamilton waiting for him with weapons drawn. Officers said he turned to face them, and was lifting his rifle into a firing position when they opened fire. Higgins was struck six times and fell back into the bar where he was later found dead. A bartender inside the bar was also likely grazed by an officer’s bullet during the shooting. Higgins did not have a chance to fire his rifle at officers.

Police called out the Critical Incident Regional Response Team to handle the follow up investigation. A search of the scene and Higgin’s car and backpack found another rifle in his vehicle and several hundred rounds of ammunition on his person. Investigators also discovered that Higgins had made multiple comments and goodbyes to friends and family that evening.
DeCecco said “there is simply no doubt in my mind that Officers Kehoe and Hamilton ended a deadly threat not only to themselves, but to all responding officers. Because of their training, experience, dedication and courage, not only did they go home to their families that day, all the responding officers did as well.”

Investigators are still trying to determine Higgins’ mental health status. There are reports that he’d been previously taken into custody for his protection after making suicidal threats, but Winnebago County detectives are working to get his military and medical records to determine if that is the case.