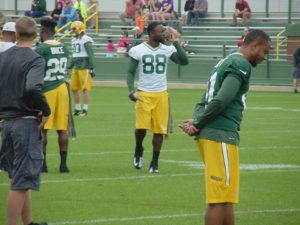 Ty Montgomery’s rookie season has been marred by injury.  Those injuries only allowed the former Stanford product to play in six games last season, catching 15 passes for 136 yards and two touchdowns.

Montgomery has been relegated to rehabbing his ankle and watching his teammates from the sidelines.  He had hoped to be back on the field for the start of training camp this week.  Instead, he was one of six players to start training camp on the P.U.P. list.

“That’s what I was pushing for,” Montgomery said, “but at the end of the day, my body has the final say.  If it’s not looking quite right or quite the way where they want me to be, then just take it day by day.”

The Packers having an extra preseason game and another week of training camp should help Montgomery.  If he can get back sometime soon, he’ll still have plenty of time to get ready for the regular season.  He’s hoping his stay on the P.U.P. list doesn’t extend into the regular season.