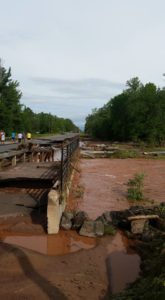 Eighteen displaced families on the Bad River Indian Reservation are still living at the tribal casino near Ashland, as 23 tribal homes were damaged or destroyed in last week’s flooding.

Wisconsin Emergency Management says County Trunk E between Ashland and Bayfield will be closed for several months because a major culvert has to be replaced. US 2 in Ashland and Iron Counties is fully open to all traffic. Portions of Highways 13, 63, 122, and 169 remain closed.

Three meetings are planned for Friday in Ashland, Hurley, and Hayward where local officials can seek help from various state agencies in assessing road damage, and learn more about state loans.

Total damage from the storms has risen above $35 million – including $2.3 million to homes and businesses.