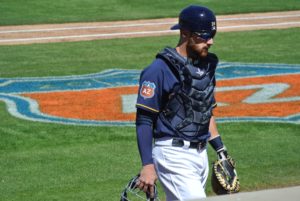 The Milwaukee Brewers thought they had a deal in place to send Jonathan Lucroy to the Cleveland Indians in exchange for four players, three of them prospects.

However, a short time ago, the Milwaukee Journal Sentinel, citing a source close to the situation, reported that Lucroy has vetoed the trade.

The deal would have sent Lucroy to the Indians for prospects: catcher Francisco Mejia, shortstop Ju-Cheng Chang and outfielder Greg Allen, plus a fourth player to be named.

The JS report says the Indians were unable to meet Lucroy’s demands as far as compensation for him accepting the trade.  Cleveland was one of eight teams on Lucroy’s no-trade list.

Lucroy didn’t play in Saturday night’s game against the Pirates, anticipating that a trade was in the works.  Word of a deal came down the pike after the Brewers 5-3 victory.

(Update) Below is audio from Jonathan Lucroy as to why he vetoed the trade.

AUDIO: Lucory on what is important :08

AUDIO: on how stressful things have been :26