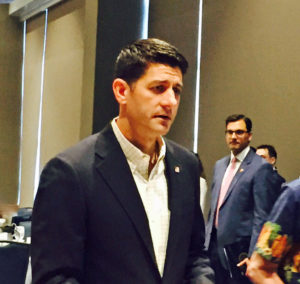 House Speaker Paul Ryan of Wisconsin had his turn in the spotlight at the Republican National Convention on Tuesday night. Ryan, in his role as convention chair, had announced earlier in the evening that Donald Trump had secured the necessary votes to become the party’s nominee for president.

He mentioned Trump just twice in has 12 minute speech to delegates it Cleveland.

“The next time that there’s a state of the union address, I don’t know where Joe Biden and Barack Obama are going to be, but you’ll find me right there on the rostrum with Vice President Mike Pence and President Donald Trump,” Ryan said.

Ryan said elections are about choices. “We Republicans have made our choice. Have we had our arguments this year? Sure we have. You know what I call those? Signs of life.”

The House Speaker and former vice-presidential candidate says voters have a choice – repeating the failures of the Obama years with Hillary Clinton, or supporting real change.

“When it’s about ideas the advantage goes to us. Against the dreary backdrop of arrogant bureaucracies, pointless mandates, reckless borrowing, willfull retreat from the world and all that progressives have in store for us,” Ryan said. “Only with Donald Trump and Mike Pence do we have a chance at a better way.”

In a reminder of the many crucial down ticket races, Ryan also urged Republicans to elect “a conservative governing majority” in November. “We can do this. We can earn that mandate, if we don’t hold anything back.”