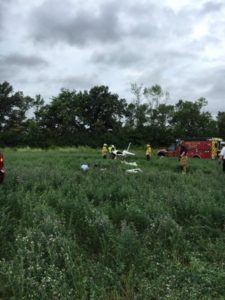 Sheriff’s Captain Rick Olig says several people at a business near the airport witnessed the crash, which he said happened after the plane was either making a landing or banking maneuver. “The plane operator lost control and crashed at the northwest portion of the Fond du Lac County airport,” he said.

Both men were taken to the hospital by helicopter. The airport remains open, but the scene was closed so the FAA can investigate the crash.