You are here: Home / Crime / Courts / Soglin: ‘resistance is not an option’ to arrest 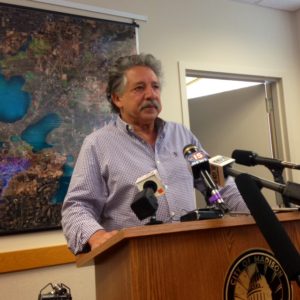 Madison Mayor Paul Soglin says “resistance is not an option” when people are being placed under arrest by police. A Madison officer shot and killed a man who police say was armed with a pitchfork on Thursday night. And a little over a week and a half ago, video of a Madison teenager resisting arrest went viral.

Soglin held a press conference on Friday, and reviewed the appropriate — and inappropriate — responses when individuals are faced with arrest.

“They can obey the order of the police officer, they can in effect go limp and not resist, or they can make the mistake of not obeying,” the mayor said. “People who may think that they negotiate with an officer in the middle of a crisis, that’s just totally unreasonable.”

Soglin suggested a public information effort might be needed.

“We are at a point where too often, we are not getting the safety and the cooperation that is essential,” he said. “When we have a situation with a police officer, and the officer gives an order or a command, there cannot be resistance. We just have to be clear about that.”

“We really appreciate Mayor Soglin’s comments on this” said Jim Palmer, Executive Director of the Wisconsin Professional Police Association. “A week ago today, we actually called for this very thing. We said that there needs to be a community-wide or a statewide discussion that focuses not only on law enforcement interactions with the public, but also pays some direct attention to public interactions with police as well.”