You are here: Home / News / State of emergency declared in northern Wisconsin 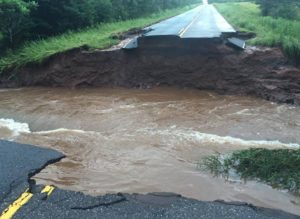 Two men were also reported killed as a result of the storms – one in Bayfield County and one in Iron County.

The governor toured damage in the region Tuesday evening. He has also instructed National Guard and all state agencies to provide aid to those affected by the storms.