You are here: Home / Sports / Walker grabs first round lead at the PGA Championship 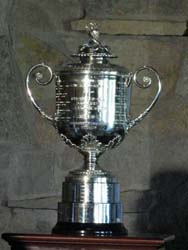 Jimmy Walker fired a personal major best 5-under par 65 and has a one-shot lead after the first round of the 2016 PGA Championship at Baltusrol in Springfield, New Jersey.

British Open Champion Henrik Stenson closed with three birdies on the back nine to finish with a 3-under par 67, trailing Walker by two shots.

Madison’s Steve Stricker shot a 1-under par 69 after a chip-in birdie on the final hole of his first round.  He is four-shots off the lead.  Defending champion Jason Day is 2-under par, 3-shots back.

Things didn’t go so well for defending U.S. Open Champion Dustin Johnson.  He had just one birdie and shot a 7-over par 77.

Round two is set for today.