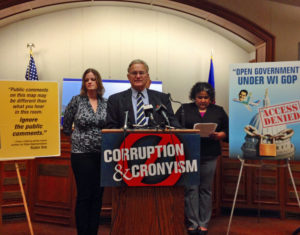 Democrats in the state legislature say open records remain endangered in Wisconsin. Just over a year ago, Republicans attempted to gut state open records law. “We need constitutional protections for the people of this state to have access to open records and to ensure that open meetings laws are followed,” said state Representative Peter Barca of Kenosha, the Assembly minority leader.

Barca and fellow Democrats, Representative Katrina Shankland of Stevens Point and JoCasta Zamarippa of Milwaukee said Wednesday that the Walker administration continues to drag its heels in honoring open records requests on a variety of issues. “They continue to have these prolonged delays in releasing public records, some of which I don’t know whether we’ll ever actually have access to,” Barca said.

The Democrats held a press conference to mark the one year anniversary of a last-minute state budget proposal which would have exempted most communications and research done by state lawmakers, their staff, and legislative employees from Wisconsin’s open records law. Republicans removed the language just days after its introduction, following a firestorm of criticism from constituents, the media, and open government groups.

“We also learned through open records requests that the media did, that the open records change was coordinated between both houses and the governor’s office,” Shankland said.

“We urge the public and media outlets to continue to hold Republican legislators accountable,” Barca said, adding that Governor Scott Walker “last March put out a new edict saying that they were going to more immediately release records.”

Tom Evenson, Deputy Communications Director for the Walker administration, responded to a request for comment on the Democrats’ comments.

Wisconsin citizens deserve a greater level of transparency from the legislature. If Representative Barca is serious, he should implement measures that would hold his office to the same high standard of records retention required of the executive branch.