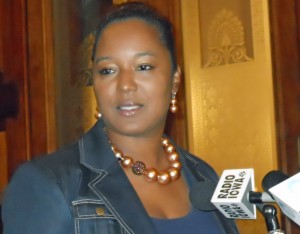 The online video posted this week comes as Clinton is accusing Trump of being racist, and building his campaign on “prejudice and paranoia.” Trump’s campaign has said Clinton is “pandering to the worst instincts in our society” and should be ashamed of herself.

In a call with reporters on Thursday, state Sen. Lena Taylor (D-Milwaukee), one of two African-American lawmakers in the state Senate, said there’s nothing inappropriate about the video, which also highlights Trump’s endorsement from former Ku Klux Klan Grand Wizard David Duke. “He has candidly not disowned those endorsements, and he has promoted and encouraged hate and divisiveness,” Taylor said.

Trump’s campaign accused Clinton of trying to distract Americans from the “single worst week of her political career.”